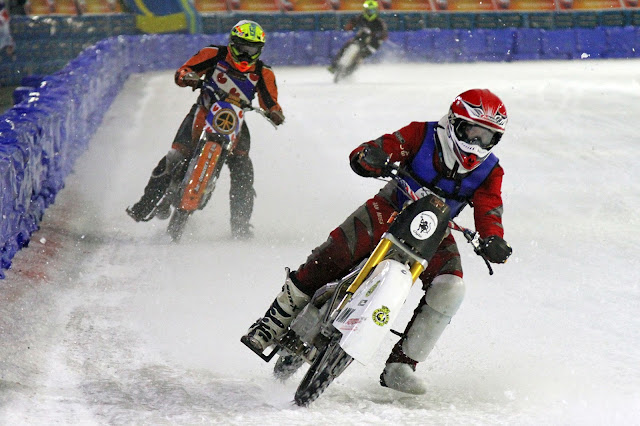 Ice speedway season 2018 has now been tapped. A week ago on the last weekend of the season in Heerenveen, Dimitry Koltakov secured the world championship with awe-inspiring power. On Friday, the Roelof Thies Cup saw the ups and downs of Finns. Matti Isoaho drove sixth in a really strong team, with other Finns, Markku Larronmaa and Tomi Kirilov, leaving two starts at Thialfi Stadium.


- The trip was great. The bunch was good and the stuff bad, Larronmaa summarizes and goes on:

- The competitions were arranged really well. The experience of that type of track was very important. In the first exercise I went to the back of the tail ring. Hard ice caused other problems too, and it felt like everybody in the bale was in the bale. On Friday my own race ended after two batches, knock-out, according to the chart. The raid continued during the racing weekend in RTC and GP. On the first day of the GP, there would be seven crashes. Now we are resting for a couple of weeks, after which we will return to the day as an X-ray therapist and start preparing for next winter, Larronmaa decides.

Matti Isoaho of the Oulu Motorcycle Club drove through his own name through the sport's enthusiasts.

- I drove 12 races over the past season and got a good lesson in the Swedish Championships early this year. Kankkusen Tiri and Nyrösen Jussi gave some good tips other than driving. In the SM finals I did not look at the chart as the batch numbers and the colors of the helmet hat, the style exactly the same who or who comes, hard to go in any case. The bronze medal won after the race warmed strangely. The season ended in Heerenveen. There was a little bit in the yard for the adjustments, the bike bounced backwards pretty much, though there were problems even among the GP drivers. Overall, however, there was a good feeling, Isoaho told reporters.

The completed season in Finland was varied in many ways. Tomi Tan finished the season with his fourth run. The accident brought an even worse offense that stopped driving at one go. The man himself had done more work than ever before, but still short. The racing of motor racing struck the worst possible way, and all really went out to Strömsöö.

The undersigned saw in the season a lot of good. The SM-finals in Kauhajoki saw a really good ice rink, even though the race itself would have taken less than a few smaller races. For some of the drivers, the first race races took place just in the SM-finals. Valkeakoski organized the first Ice Hockey Competition with Mikko Mäkinen and his partners. The race went smoothly, even though injuries were seen. Varkaus made a great deal of card debut with the PM games he had arranged. After the race, the Swedes have already proposed the organization of the World Cup qualifier for next winter, so this is a lot of competition and its level. The season of the Long Spiders ended at the Hailuoto Ice Hockey series in the second competition, and there the Kanters renewed the championship as in the previous season.

The fact is that ice axes need new drivers. According to the likes of Tampere, some of the younger people have come in, and likewise elsewhere in Finland have been fundamentally engaged in maintaining the species. This is really needed now, as are the competition organizers. Without competitions the species level is declining and we do not want to.

Text: Timo Eronen
Posted by Alexey at 2:31 AM