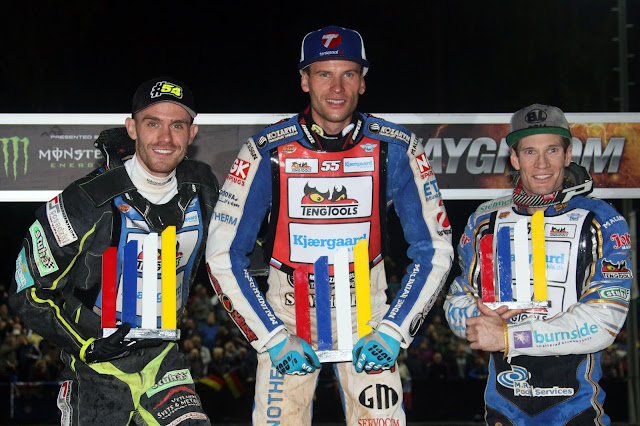 
Slovenian star Matej Zagar insists he doesn’t want to wait for an FIM Speedway Grand Prix wild card for 2018 after charging to IPONE German SGP victory in Teterow on Saturday.

The fourth victory of Zagar’s SGP career moves him within seven points of Vaculik, who currently occupies the eighth and final automatic qualifying place for the 2018 World Championship.
Riders who finish outside the elite eight must hope for a wild card from the SGP Commission. But Zagar has no intention of leaving his SGP future in the hands of others. He said: “It’s always a tough one when you have to wait and see what’s going to happen – whether you’re going to be picked or not.

“I’m definitely worth picking, but I don’t want to wait on that. It’s all about winning. Winning makes you happy, so that is my aim. There are three GPs to go and hopefully three good ones for me.”

Zagar is delighted to be ending the season on form after an up-and-down run of results in the SGP series.

He said: “To be honest, I made some wrong decisions at the beginning of the season regarding my equipment. Now I am back on track where I need to be.

“The end of the season was also much better in the leagues. In Sweden, I have been good. I am very, very pleased that I am going well and also that people are trying to help me. I am really grateful for that.”

Zagar was certainly grateful for his team’s help in Teterow. He said: “I had some trouble with my clutch, but I want to say thanks to my team – they worked really well. We changed the clutch and then I had much better starts.

“That was the key, to be honest. You won’t pass three riders in the semi and the final because everybody is fast. My team worked hard to fix things and we made it together.”

Runner-up Vaculik was pleased to secure second spot as he battles to defend his place in the world’s top eight.

He said: “I am very happy with today and pleased with the result I got. I would like to say thanks to my team, my tuner and all the people who support me.

“This position and the points are very important for me. My priority and goal for this season is staying in the top eight and I’ll do everything for that.

“A few months ago I had some bad meetings, but it has turned a good way, so hopefully I’ll keep it up for the next few rounds. I’ll just try my best and I enjoy racing in the Grand Prix.”

Third-placed Doyle cruised into a 10-point World Championship lead over nearest rival Patryk Dudek, but pledged to remain grounded after seeing his 2016 title challenge cruelly ended by a crash at the penultimate round in Torun.

He said: “It’s nice to bag a few points. But like I keep saying, you can have one bad round and be out of it, so I’m just keeping level-headed and scoring the points.”

Next up for the SGP stars is the Stockholm SGP at Friends Arena on September 23.