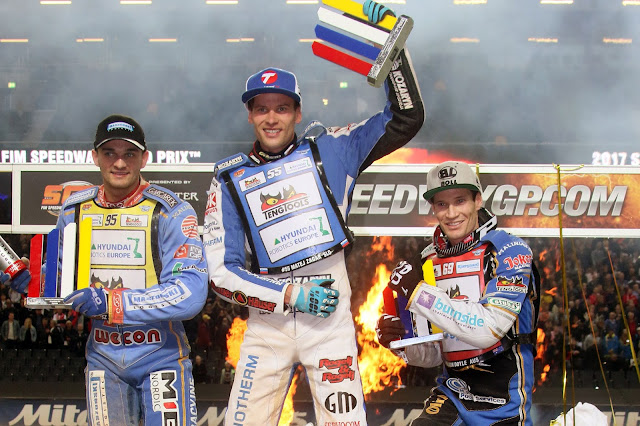 Red-hot Slovenian star Matej Zagar won his second straight FIM Speedway Grand Prix in Stockholm on Saturday, and said “I hope this is a big turnaround for the rest of my career.”


The Ljubljana-born racer followed up his IPONE German SGP victory in Teterow on September 9 with Stockholm SGP success at the Friends Arena, beating Bartosz Zmarzlik, Jason Doyle and Peter Kildemand in the final.
Doyle’s third place and huge 18-point haul puts him 21 away from securing his first world title, which could come at the NICE Torun SGP of Poland on October 7.
Zagar is also a man on a mission, having surged up to the all-important eighth place in the World Championship, which would guarantee him qualification for the 2018 SGP series.
Slovenia’s greatest speedway rider goes into the final two rounds in the form of his life and boosted by his first ever back-to-back SGP wins.
Had he started the season in his current form, Zagar could have been in championship contention. But the grounded Smederna and Czestochowa star knows consistency is crucial. He said: “It is what it is; the SGP series is 12 rounds.  I can only say this is what I am capable of.
“I hope this is a big turnaround for the rest of my career and I don’t get many more of these bad meetings. If I can avoid them, I will fight for much better positions. But I’ll take it as it is. I’d rather finish well than start strong and finish badly, so it’s okay.”
Zagar only just made it into the semi-finals on countback with seven points and enjoyed a slice of fortune in his semi-final, with both Emil Sayfutdinov and Chris Holder suffering exclusions. But No.55 had no qualms about making the most of a kind break. He said: “That’s speedway! I have been unlucky many times. I’ve had some crazy things go against me over the years, but it’s karma. What goes around comes around. You have to get lucky sometimes. Without luck, you’re nobody. I took my chance 100 percent. We made good changes with my team to make the bike hook up again and it was brilliant. I felt really fast in the semi and final. I knew if I made a good gate, I could win this.”
Zagar puts his sensational second half of the season down to a change of engine tuner, having teamed up with Britain’s Peter Johns.
“Once again, thanks to Johnsy,” he said. “He made all the changes to my season and I can say I love his engines.”
Zagar has watched the likes of Chris Holder, Greg Hancock and Tai Woffinden win world titles on Johns-tuned engines over the past five years. Asked if he could replicate their success in the coming years, Zagar said: “I would love to.”
Second-placed Zmarzlik was elated to get back on form in the SGP series after scoring just two points at the last round in Teterow.
He said: “I’m very happy today because I am second. My last GP was not very good. I only scored two points. This was a little better. I say thank you to my sponsors and thank you very much to my team – they did a very good job.” World Championship leader Doyle may not have topped the podium, but he was ecstatic with his 18-point tally.
He said: “It’s not all about winning the final; I am very happy with the points I scored tonight. Who would have dreamt that I could get 18 points in a GP and extend my lead? “To score that many points, I am over the moon. Hats off to the boys; they rode very well in the final. I am happy with my third place.”
WORLD CHAMPIONSHIP STANDINGS: 1 Jason Doyle 132, 2 Patryk Dudek 110, 3 Maciej Janowski 108, 4 Fredrik Lindgren 107, 5 Emil Sayfutdinov 102, 6 Tai Woffinden 100, 7 Bartosz Zmarzlik 94, 8 Matej Zagar 86, 9 Martin Vaculik 85, 10 Chris Holder 75, 11 Antonio Lindback 72, 12 Piotr Pawlicki 69, 13 Peter Kildemand 46, 14 Greg Hancock 45, 15 Niels-Kristian Iversen 44, 16 Vaclav Milik 20, 17 Martin Smolinski 17, 18 Nicki Pedersen 8, 19 Michael Jepsen Jensen 8, 20 Maksims Bogdanovs 8, 21 Max Fricke 7, 22 Kenneth Bjerre 7, 23 Krzysztof Kasprzak 6, 24 Kai Huckenbeck 4, 25 Jacob Thorssell 4, 26 Przemyslaw Pawlicki 3, 27 Craig Cook 2, 28 Linus Sundstrom 2, 29 Kim Nilsson 2, 30 Josh Bates 2, 31 Nick Skorja 1.