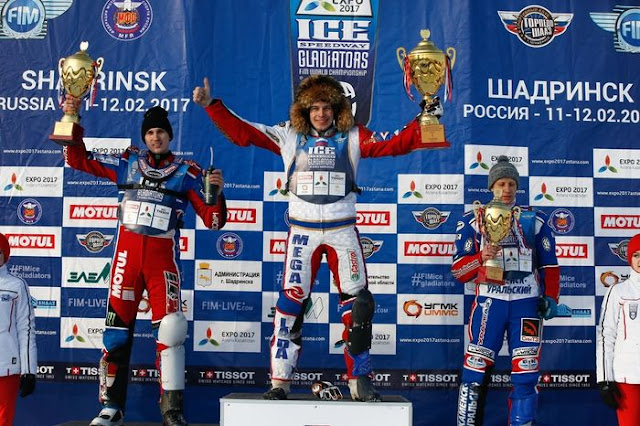 Igor Kononov was once again the clear winner on the second day in Shadrinsk dropping only two points during the meeting. Enjoying a fruitful weekend he added 19 points to his total and moved to within 5 points of the lead.

There was again a satisfactory number of spectators and the weather was pleasant but cold at around -20 degrees. However the track was in good condition and the spectacular crashes of the first day were not repeated.
Wild Card Nicolai Krasnikov dominated the qualifying heats but for the second successive day was denied a place in the final, this time when he was beaten by Daniil Ivanov in the last 30 metres of his semi final race.
In the final, Kononov again led from the start as current champion Dmitri Khomitsevich settled for third place behind Dmitri Kolkatov dropping further behind the series leader. He will consider the meeting result as disappointing by his high standards but still remains a major contender for another gold medal
On the second day the Swedes led the charge for the minor places with both members of the Svensson family, father Stefan and son Niclas, reaching the semi final stage. Niclas was particularly impressive and his 8-point score included two race wins.
Franz Zorn saw his medal hopes take a blow when after a win in his first race, he was able to add only 3 more points to his total, although he still managed to retain his sixth place.
Leading scorers after Final 2 are:1. Dmitri Kolkatov (Russia) 72
2, Igor Kononov (Russia)) 67
3, Dmitri Khomitsevich(Russia) 66
4. Daniil Ivanov (Russia 56
5. Dinar Valeev (Russia) 52
6. Franz Zorn (Austria) 38
7. Nicolai Krasnikov (Russia) 28 (Wild Card)
8. Stefan Svensson (Sweden) 26
9. Niclas Svensson (Sweden) 23
Riders and their support teams now move to Khasakstan where Final3 will be held next weekend in Almaty.
Graham Brodie