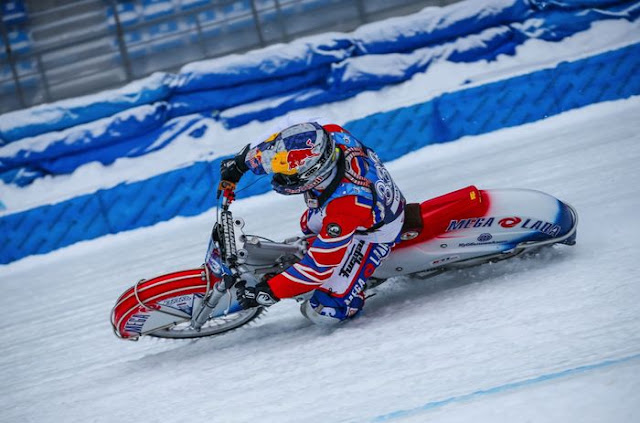 If anyone has doubts about how tough the Ice Speedway Gladiators can be, then look no further than Daniil Ivanov. Only one week after breaking his shoulder in a disastrous fall in Almaty he is planning to race again for his Russian club Mega-Lada in Togliatti where the crucial final round of the Russian Superleague championship is to be held.
Doctors have advised Daniil that surgery is necessary but that this can be delayed until the end of the season if necessary and if all goes well this weekend, he will help his club to the championship title then declare himself fit for the next round of the World Championship in Berlin on 4th and 5th March.


Another Gladiator in the wars is Austrian Harald Simon who, after a gruelling and weather-delayed drive from Kazakhstan, has arrived in Ufa where the European Final will be held this weekend. He brings with him a broken rib, which he collected in a clash with Dinar Valeev in Almaty.
Niclas Svensson and Ove Ledström also brought back some bruising injuries from Kazakhstan and suffered similar travel problems in returning to Sweden where both will compete this weekend in the final of the Swedish Championship in Hallstavik.
Updates and a preview of the Berlin round will be posted next week.
Graham Brodiehttp://www.fim-live.com/en/article/racing-through-the-pain-barrier/
Posted by Alexey at 10:26 AM