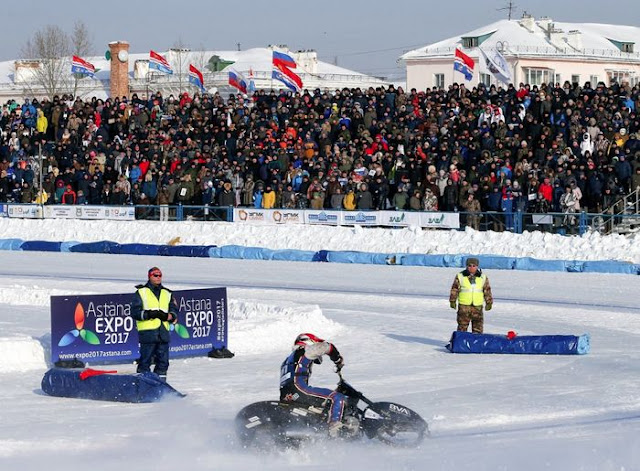 Igor Kononov emerged on top of the podium after winning the Final on the first day I Shadrinsk and in doing so moved up two places in the current standings.

Under a clear blue sky and despite a temperature around -25 degrees, the Torpedo Stadium was filled to near capacity and the fans were rewarded with some spectacular action. The extreme cold affected the race track to some degree and created some difficulties for the riders and there were a number of falls as a result.
Current champion Dmitri Khomitsevich enjoyed mixed fortunes, falling alone in his first race then becoming the innocent victim of a frightening crash with his close rival Dmitri Kolkatov from which thankfully both escaped without injury
Less fortunate was young Swede Jimmy Olsen who crashed heavily whilst defending his lead against three of the Russians in his semi final. He suffered a dislocated left elbow and he is returning to Sweden for immediate surgery as his season comes to a premature end.
The Final was fought out between the top Russians and it was Kononov who flew from the gate and led the race to the flag. Khomitsevich and Koltakov renewed their rivalry and it was Koltakov who stole second place to retain his lead at he top of the table
Leading scorers after the first two rounds are:1. Dmitri Kolkatov (Russia) 54
2, Dmitri Khomitsevich (Russia)  50
3, Igor Kononov (Russia)) 48
4. Daniil Ivanov (Russia 42
5. Dinar Valeev (Russia) 40
6. Franz Zorn (Austria) 32
7. Jimmy Olsen (Sweden) 20